The beauty of the story is within the storyteller's mind before being heard. Think for one second, Think about Your travel plan for this year. Do you know that the wildebeest migration in Serengeti will start soon?

But what about reaching the summit of the highest mountain in Africa? The Kilimanjaro at 5,895 m?

Visit the Ngorongoro crater, the wildlife heaven of Tanzania. It was once named Eden!

Zanzibar Island makes the most of it, the sea breeze in Zanzibar sends you to the world of giant dreams! It's only in Tanzania

Contact us for a unique trip to Tanzania. It's Travel Time, Yes don't miss the moment! 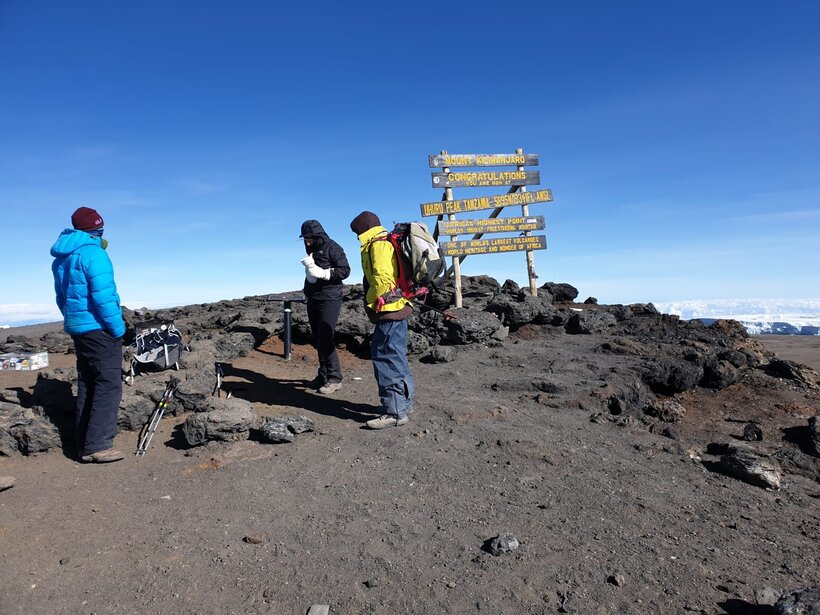 The African summit, Mount Kilimanjaro! One of the Natural Wonders of the world, it's the king among the islands in the African sky.

Situated south of the equator in Tanzania. This is Africa’s highest mountain and the highest “free-standing” mountain in the world.

It is not an awesome dormant volcano, but it is a spectacular and diverse showcase of the natural world as well.

The winning spot for all mountaineers, it's a challenging but rewarding peak of Africa.

With the support of our guides and porters, we will lead you to the summit of Africa at 5,895m well known as Uhuru peak.

Fulfill your dream of reaching the only ice-capped mountain in Africa. The only permanent glaciers, in tropical Africa.

Mount Kilimanjaro can be the experience of a lifetime! It is a challenge that cannot be taken easy.

The choice of the best routes makes your climb safe and comfortable.

The well-known routes for mount Kilimanjaro include

Also known as the Coca-Cola route. Marangu is the Park Headquarters of Kilimanjaro National Park. Marangu Route begins in the southeast and approaches Uhuru peak via Gilman’s Point. It is possible to climb via the Marangu route for 5 days or 6 days.

The Marangu Route is the only route that offers hut accommodation for the entire climb. And uses the same trail for both ascend and descend.

One of the attractions you can see on the Marangu route is the Mahundi crater and zebra rocks.

Also known as the Whisky route, Machame Route is one of the most popular routes on Mount Kilimanjaro. This route is very scenic, providing hikers with incredible views and varying landscapes.

Climbers to this route descend through the Mweka route, on the southeast. You can climb Kilimanjaro via the Machame route for 6 days or 7 days depending on time, budget, or your fitness.

One of the attractions you can see on the Machame route is the Shira caves.

Lemosho is the most beautiful route on Mount Kilimanjaro. Visitors start hikes in the rainforest and cross the spectacular Shira Plateau. Then connect with the Machame route.

The route has a longer distance to cover in the rainforest ecosystem than other routes.

Climbers who want to spend many days on the mountain should use the Lemosho route. Eight (8) days of climbing are recommended for altitude acclimatization.

The Umbwe Route is the most difficult route but short. This route is less traveled by many Kilimanjaro climbers.

This route joins the Machame Route at Barranco camp. And follows the southern circuit to the summit and descends via the Mweka Route.

This route starts from the North-East and passes through the Saddle. Situated between Kibo and Mawenzi Peak to approach the summit via Gilman’s Point.

The Rongai route descends via the Marangu Route. The Rongai Route is flatter than the other Kilimanjaro routes. But because of its profile, it does not offer trekkers good options to climb high and sleep low.

Rongai is beautiful as it travels through the rainforest and remote wilderness areas. Yet, it is not as varied as Machame and Lemosho. It is possible to climb for 6 days or 7 days.

Mweka is the shortest route from the summit. It is a special descending route for hikers from Machame, Lemosho, and Umbwe routes.

Not only that but also this route is useful for re-supplying fresh food to Karanga camp or Basecamp.

Mweka route has two (2)campsites. The first campsite from the base camp is a high camp known as Millennium camp and Mweka camp.

The accommodation on the way up and down is camping with mobile tents carried by porters.

The best time for climbing Kilimanjaro is during the dry season. Start from June to October and December to February. Try to avoid the rainy season during March, April, May, and November.

Reaching the peak of Mount Kilimanjaro is a dream of every climber. Before your trip make sure you have all the necessary information. Packing lists ideas and the best time to climb Kilimanjaro.

If you have any questions feel free to contact Blessing Safaris

Five Things to do in Tanzania

Happy To Meet You!

Welcome to forum4travel, the Travel Forum!